96. To Hell and Back by Audie Murphy 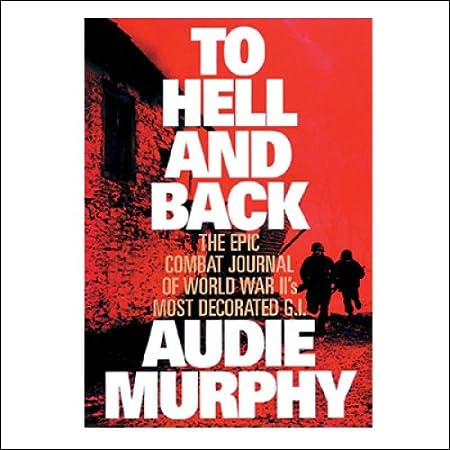 In November, I am going to the part of France called the Colmar Pocket where this man was made history as the most decorated combat soldier in military history. What bravery!

This is his entire story from growing up poor in Texas to joining the military during World War II. He moves in combat from North Africa to Italy to France to Germany.

I could NEVER be a soldier. This man was so gifted at it. I am also watching the movie as I am reading it. He stars in the movie about his life because he became an accomplished actor after the war. This is not for everyone, but I was mesmerized.


When I was a child, I was told that men were branded by war. Has the brand been put on me? Have the years of blood and ruin stripped me of all decency? Of all belief?

Not of all belief. I believe in the force of a hand grenade, the power of artillery, the accuracy of a Garand. I believe in hitting before you get hit, and that dead men do not look noble.

But I also believe in men like Brandon and Novak and Swope and Kerrigan; and all the men who stood up against the enemy taking their beatings without whimper and their triumphs without boasting. The men who went and would go again to hell and back to preserve what our country thinks right and decent.

My country. America! That is it. We have been so intent on death that we have forgotten life. And now suddenly life faces us. I swear to myself that I will measure up to  it. I may be branded by war, but I will not be defeated by it.

Gradually it becomes clear. I will go back. I will find the kind of girl of whom I once dreamed. I will learn to look at life through uncynical eyes, to have faith, to know love. I will learn to work in peace as in war. And finally -- finally, like countless others, I will learn to live again. (p. 273-74)

Now comes the picture of mass defeat, the most awesome spectacle of the war. It is in the bent bodies of old women who poke among ruins seeking some miserable object that will link their lives with the old days. It is in the shamed darting eyes of the defeated. It is in the faces of the little boys who regard our triumphant columns with fear and fascination. And above all it is in the thousands of beaten, dusty soldiers who stream along the roads towards the stockades. Their feet clump wearily, mechanically, hopelessly on the still endless road of war. They move as haggard, gray masses, in which the individual had neither life nor meaning. It is impossible to see in these men the quality that made them stand up and fight like demons out of hell a few shorts months ago. (p. 270)