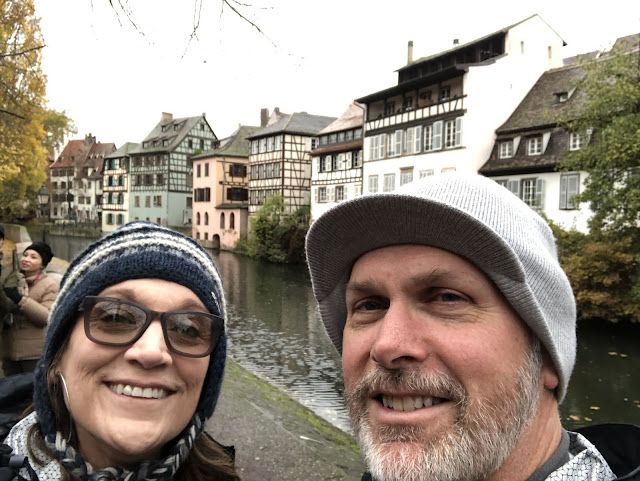 Our boat docked in Kehl, Germany, but we were up and out the door at 8:30 to bus to the charming Alsatian city of Strasbourg, France. What a gorgeous city. I didn't take as many pictures today so most of them are on our other camera.

We toured "Petite France" with the sweet half-timbered houses that look almost German. Well, they sort of are. Alsace has been part of both Germany and France throughout history as the Germans have always thought the border should be at the Vosges Mountains, and the French have always thought it should be at the Rhine River. Right now, the French win.

We also went into the center of town where they are setting up for the Christmas Market that starts on Friday. 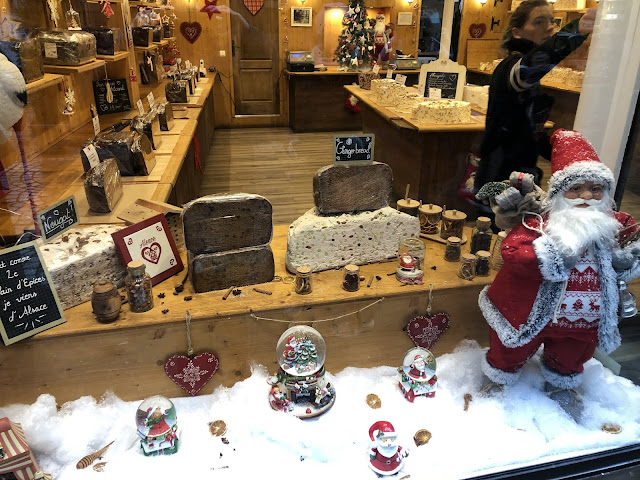 After a tour of the town, we went into the gorgeous Strasbourg Cathedral. It was lovely. Again, George got most of the shots while I did the video. As soon as we were done we went up 332 steps to the top of the tower (surprise, surprise - Weavers have this thing about towers). 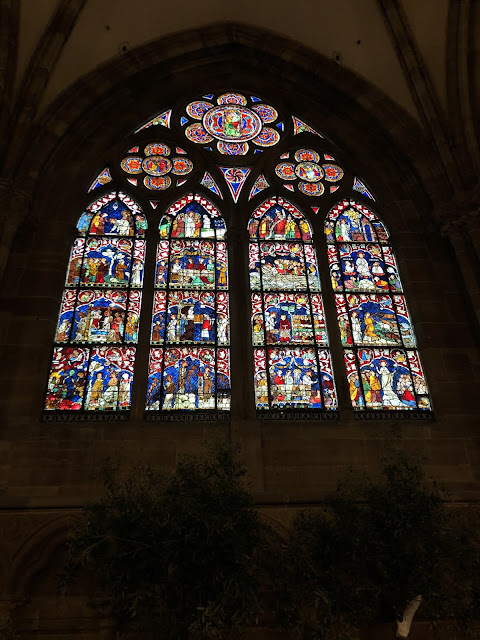 We were able to do a bit of shopping for the famous gingerbread and kugelhopf cake. We got small portions that we hope to carry in our suitcase to our son who turns 25 on this day while we are away (sniff, sniff).
We bused back to the dock at Kehl, ate lunch, and then took an hour-long nap. The only thing we did not do while we were in Strasbourg was eating Tarte Flambe (French name)/Flammenkuechen German Name. The place that was supposedly the best was closed, and we did not enough time to look for another restaurant before the bus went back to the boat. We could have stayed in town and waited for a later shuttle, but we were just TOO TIRED, and we knew that the chef was going to teach us how to do it at 5pm. So, we opted for coming back to the boat, eating lunch, and taking another nap!

After the nap, the sun came out, and we decided to go to a tower (What? Another tower for the Weavers? How could it be?) and climb up to get a view of the Rhine, Vosges Mountains, and the city of Kehl. 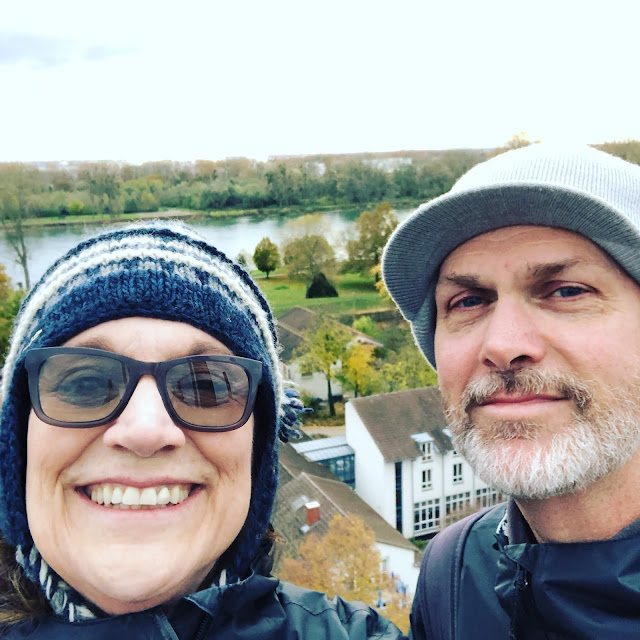 After this, we walked a charming little path to the charming city of Kehl. 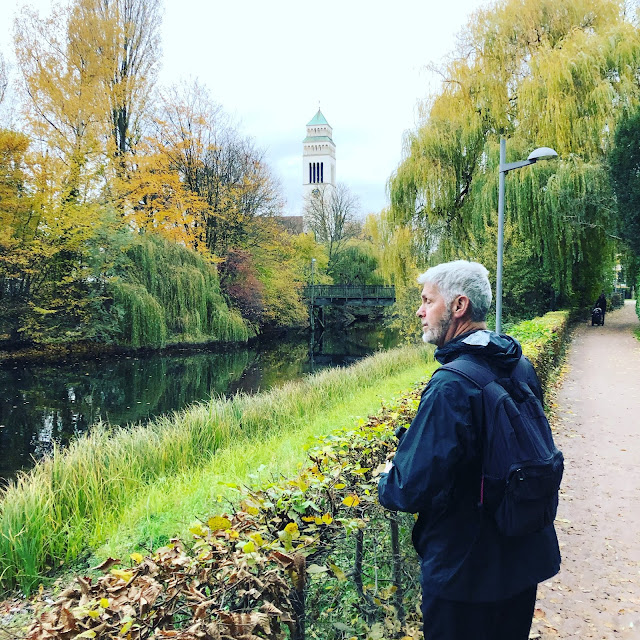 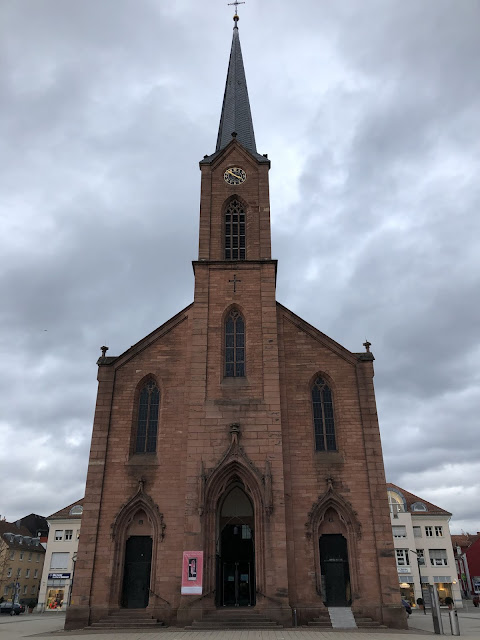 After this, we were given a demonstration on how to make Tarte Flambe, and here is my first taste:

George went to a mandatory meeting about disembarking (no way is this already over - and surprise that I would not want to go to a MEETING), and I blogged this post. 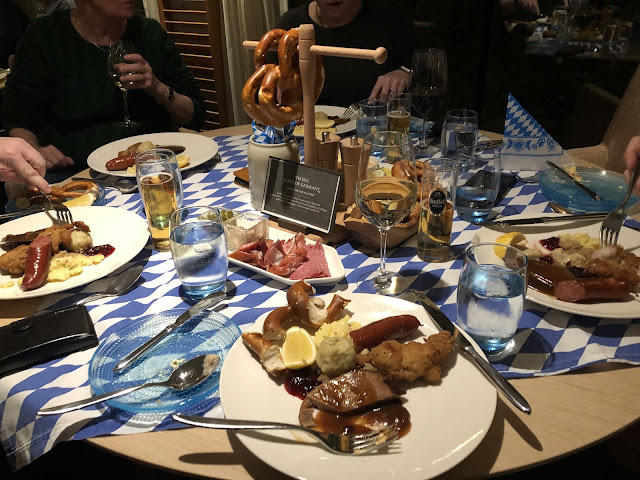 After the meeting, we had a fun German Feast with the staff dressing in German outfits. It was fun and festive. We ran into our Atlanta friends who went on the seven-hour "Taste of Alsace" tour where they went around with a foodie and a wine expert (called a "sommelier" for you wine people). This is one we really debated long and hard about, but we are not big wine people. The Atlanta people said they thought about us while they were doing it. That was so sweet. I wish we could have done it with them because they are such great and kind people. Brandy said, "I feel like we have known you already" or something to that effect. Anywho, we lived it vicariously through them. :) And I think I was SUPER tired and really needed an afternoon to rest, reflect, and then we just went for that great walk and hike up to the top of the tower. So, we made a healthy choice.

After this, we just could not do the dancing activity for the evening and fell fast asleep within minutes of hitting the pillow. I think it was at 9pm!

Our last full day is going to be a trip through the Black Forest. We have an option to go to the cuckoo clocks or go for a hike up Ravenna Gorge. Guess which one the Weavers are going to take?  It probably will be a no-brainer if you know us well. THE HIKE!

I am going to put the pictures from our Fuji camera. I wish I had been transferring them over to here, but I just got around to doing it this morning. :) Enjoy these at the end: 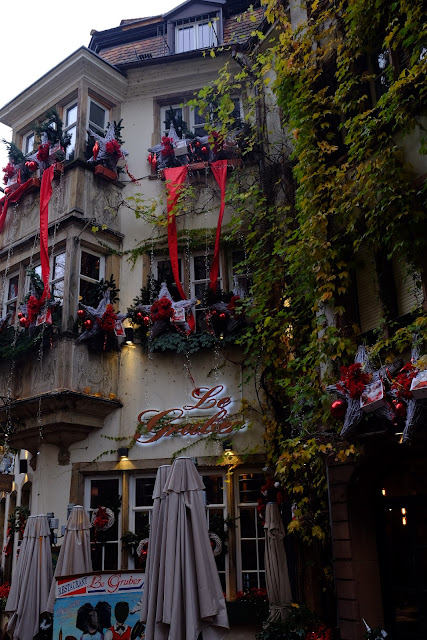 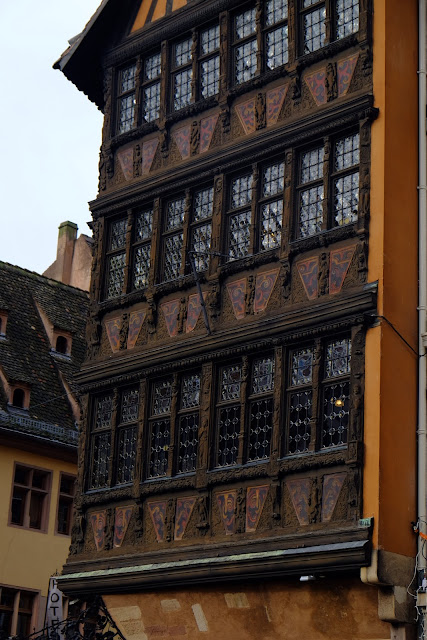 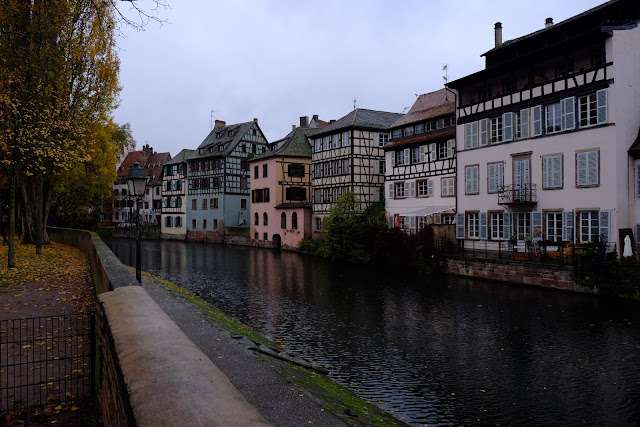 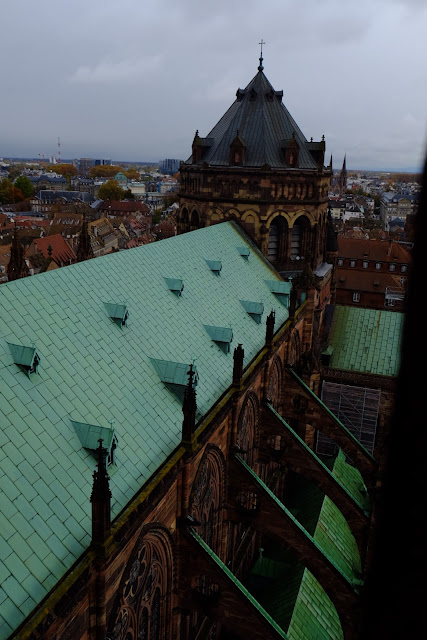 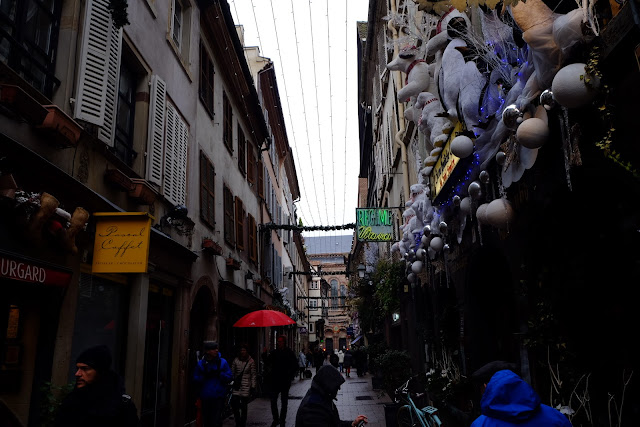 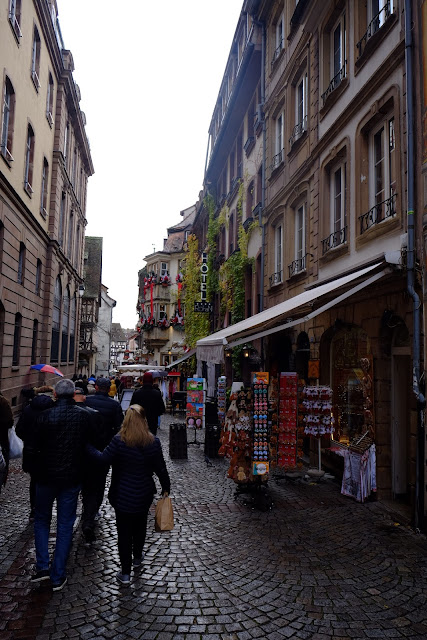 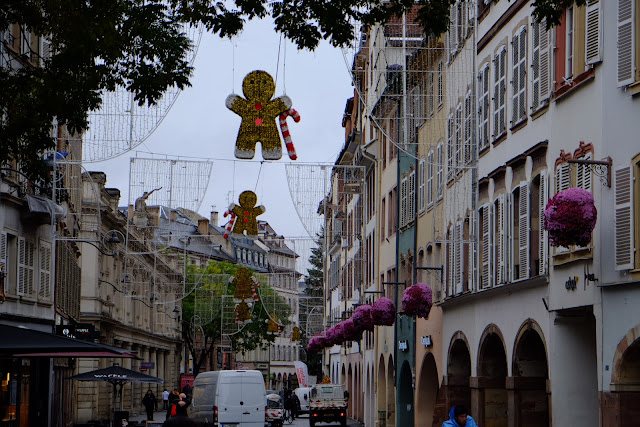 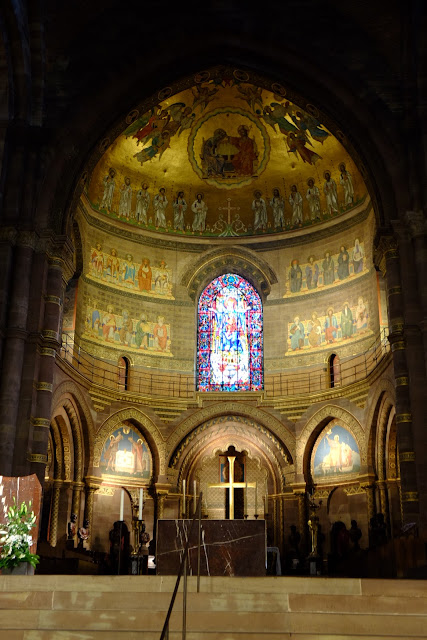 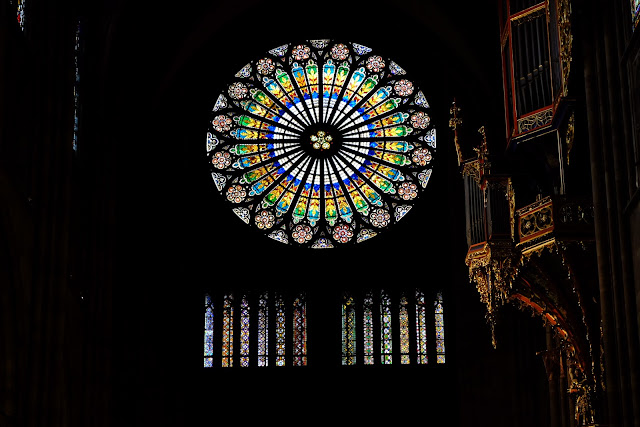 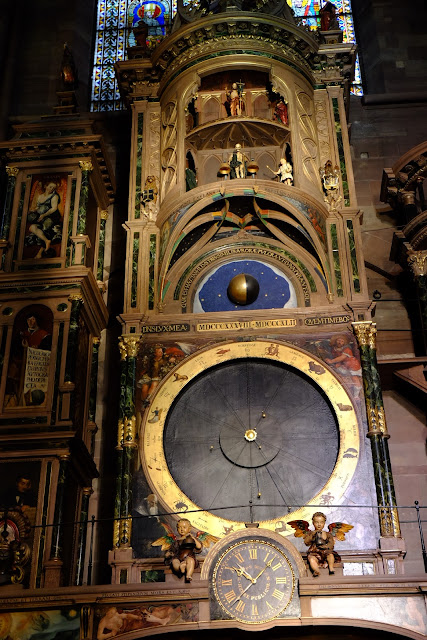 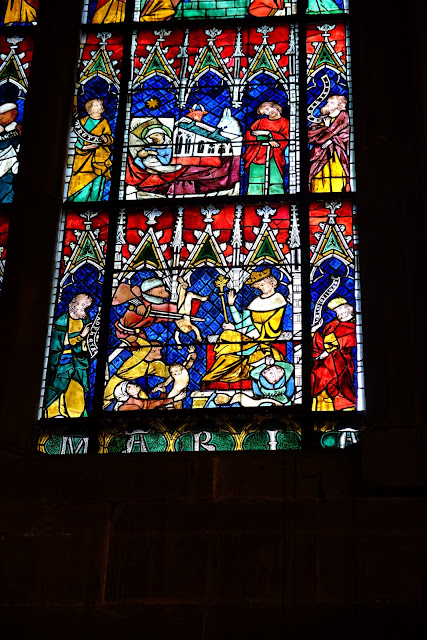 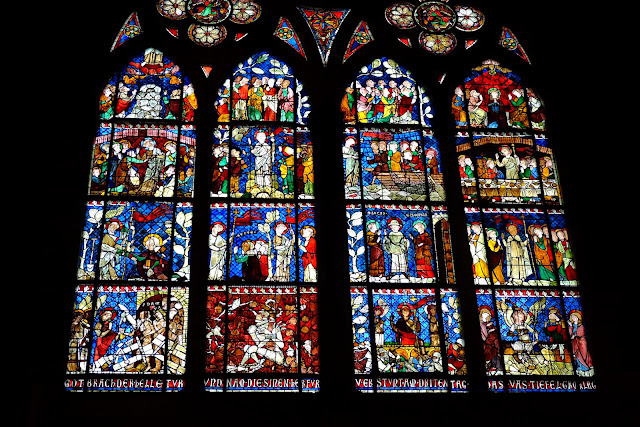