I was having an OK pain day. My quadratus lumborum was feeling pretty good. I went to have a bit of milk chocolate, and I literally felt that muscle tighten in my back, and I was in pain.

Then I got to thinking. Many times I will get up in the morning, and I will feel fine, but as the morning moves on, my back feels worse, even though I have done nothing to irritate it.

All of a sudden, I thought, "Maybe it is caffeine that is causing me more pain."  I realized that if it did it for that little bit of chocolate, then my chai tea (I have four cups of chai in the morning but it has 2 tablespoons of orange pekoe black tea is a LOT of caffeine.), it was probably the source of my unexplained pain later in the morning.

BINGO. I skipped it for two mornings, and I had no pain.

Numerous Google searches turned this up. Why has no doctor told me this before? It makes sense that since caffeine is a stimulant that it would cause muscle contraction, and when you are trying to heal muscles (like I am with my QL after 8 weeks following injury), it is probably something to forgo!

I read on a massage therapists website that she can tell if someone has had caffeine too. I think I want to go back to having my massages in the afternoon. I have had morning massages lately, and she says I have been very tight.

I give it up for a while (or maybe put one teaspoon of darjeeling instead of 2 tablespoons of orange pekoe). I do think it is contributing.

Never would have realized that unless I had felt it after that chocolate.

Chocolate is a stronger pain-inducer than coffee or tea. Chocolate causes dramatic increases in muscle tension and pain. Chocolate contains less caffeine than coffee, but has large amounts of theophylline, similar to caffeine. The combined effect of caffeine and theophylline is probably why chocolate makes muscles tense and painful. http://www.mayoclinic.com/health/caffeine/AN01211
- November 28, 2013 No comments:

Email ThisBlogThis!Share to TwitterShare to FacebookShare to Pinterest
Labels: Health, wellness of body

Just in Time for the Holidays: Reconcilosec

62. The Daughter's Walk by Jane Kirkpatrick

This is an Oregon Christian author. I read another book by her that was written in 2009 called A Land of Sheltered Promise. I enjoyed the historical subject matter about Oregon's history of the Rajneeshee, a cult that took over the little town of Antelope, Oregon back in the 1980's.  We prayed and prayed, and they left as quickly as they came. Now it is a Young Life Camp (Two of my friends were instrumental in acquiring the land, and they are mentioned in the story with pseudonyms.). It was fascinating history, but I did not care for the fictional story that surrounded the history.

This story is different. Two more years of writing under this author's belt has produced an exceptional story. I had read the biography Bold Spirit: Helga Estby's Forgotten Walk Across Victorian America for my other book club. So, when my new book club decided to read this fictional account, I was not very excited, but this one is very well-written and goes into more detail about what happens AFTER the walk across Victorian American and is told in first-person from the daughter's perspective.  I have love for first person narratives (think Jane Eyre) so I was more inclined to love this book.

Hega Estby was a Norwegian woman who wanted to save the family farm near Spokane, Washington. So she learned of a challenge by sponsors who would reward her $10,000 if she walked from Spokane to New York wearing a "reform dress" that made exercise for women easier and scandalously exposed the ankles! In the process, she dragged her daughter along. I will not tell you the outcome of their journey, but that part is only about 40% of the book. The rest of the book is what happened to the daughter afterwards! I still need to look up what really happened historically, but I will not spoil the book for you by researching and reporting it here.

This is a worthy read about women's roles, family, faith, community, and love. I really enjoyed it.

The narrator for this audiobook was excellent. She did the Norwegian accents really well.
- November 20, 2013 No comments:

Some people think I am a "P" (like to constantly take in more information and not necessarily keen on always making a final decision and therefore more open, laid-back and flexible) personality type. They enjoy the PROCESS involved in making decisions.

I am decidedly (but not strongly) a "J" (like to take in only enough information necessary to make a decision).  We enjoy the CLOSURE involved in making a final decision.

I had a lightbulb moment this morning. I think that people might think I am a "P" because my NUMBER ONE strength in the StrengthsFinder is LEARNER! I love to constantly learn new things.

I think it makes me balanced to have a "J" personality type and also a strength that likes to learn new things! I love learning more information, but I also love to have CLOSURE! 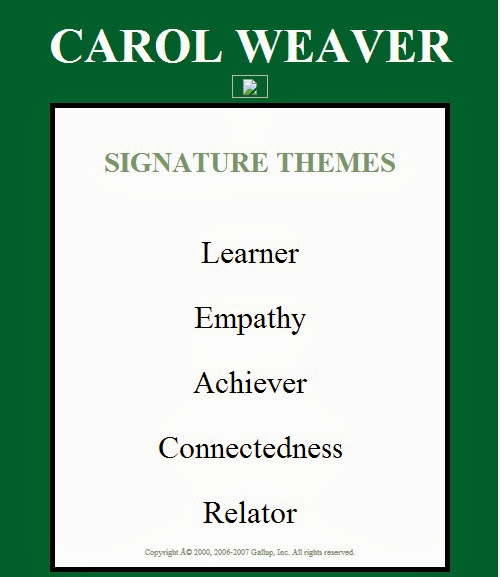 Dallas Willard on the Bible: AMEN!

Its purpose is practical, not academic. An intelligent, careful, intensive but straightforward reading—that is, one not governed by obscure and faddish theories or by a mindless orthodoxy—is what it requires to direct us into life in God’s kingdom. Any other approach to the Bible, I believe, conflicts with the picture of the God that, all agree, emerges from Jesus and his tradition.

I did not dislike this book, but it just seemed to drag on and on. He made his point and drew it out too long. I know many people like this book. So no offense.

Here is his point:


Here is the video that introduces the book:

He advocates that "Creation to Christ to End Time Consummation" is the whole gospel. He looks at what Jesus, Peter, and Paul meant when they said "gospel."

We have our groups go through the whole book of Acts and try to define what the gospel was that the apostles were preaching. His book does this for you, but I think it is better to look at the Scriptures directly for yourself! :)
- November 13, 2013 No comments:

I do not have tons of time this morning. I got out of bed at 3:30 am (that is what I get for falling asleep at 9:30 pm!), and it is a prayer and fast day for me from sunrise to sunset. So, I had a little of my tea and am enjoying time in the Word.

I have loved changing our Kingdom Community readings from writing out gospel passages to going through the key passages in the Old Testament that point to Jesus. We will get to those gospel passages, but I love, love, love that we are meditating (they are supposed to be doing a "mini" inductive study of writing out the passage - then rewriting it in their own words after meditating or studying it by looking up key words) in these passages. We just finished Abraham by covering key passages in Genesis 12, 15,17, and 22. I was so tickled that they were reading the in-between passages for context (because we all know that "context is key!").  I am also seeing that they are following through on their "I WILL" statements. These are statements of intentional action as a result of hearing what God says to them about the passage. People are starting to get the idea of the accountability involved in that, and we all grow in the process of group, obedience-based discipleship. While this is new for many people.

Oh, I forgot all about this freewrite and started Skyping with Elizabeth in India! Now I have to pack to go to Hillsboro. BYe!
- November 11, 2013 No comments:

New Tea Pot and One of the Cups I have not written a freewrite for so long. I thought I would write in a different font. I am going to try... 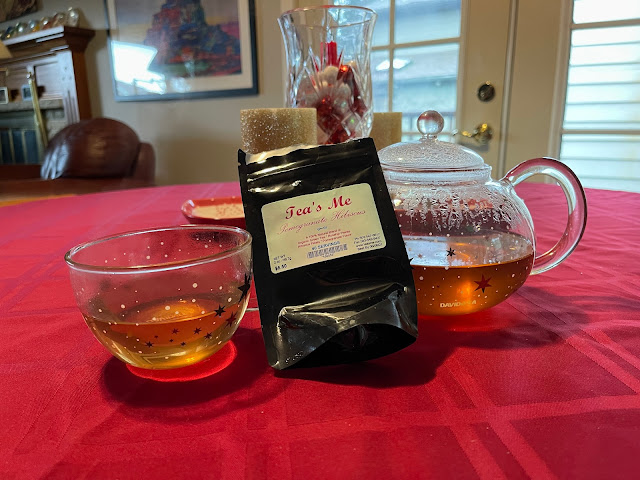