I spent the weekend at the Oregon Shakespeare Festival. It was a celebration for Laura's (second row on the left) 40th birthday which will be in December. She invited ten friends from different eras of her life. I am the most recent "era" in that, while I have known her (and admired her from afar) for about three or four years, we just started really getting to know each other since last July when we started meeting for accountability. Laura is a deep and kind woman. So, of course, she has attracted deeply spiritual friends over the years. The weekend was overwhelming for me in that I would have loved to connect more deeply with each person, but there was no prior history other than with Laura and Cathi (standing at the top), and I probably won't see any of the rest of them again.

I was a bit lonely and depressed on Saturday night until I realized I could revel in the solitude of my own room even as I listened to the hushed murmurs of midnight conversations in all the rooms around the house. I realized that I have this healthy desire to connect deeply that always seems to be frustrated in large groups of women stuck in the same place for a limited amount of time (women's retreats, Trapdoor/Lamppost getaways, etc). That desire can easily become a demand if I am not careful. 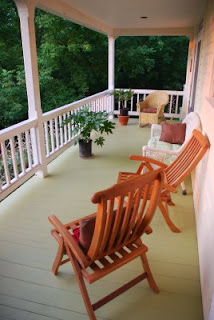 I woke up very early Sunday morning really THANKFUL that I didn't have a roommate that I would disturb! I stole away to the deserted porch and had a long and wonderful time with God where I started out with this verse from Face to Face by Kenneth Boa:

So funny that this has been my healing verse since 2006, yet I never realized it is in the context of a teaching about a deceitful heart - something that God has been speaking to me about all summer!

Oh Lord - my deceitful heart has turned away from you this
morning. Yesterday, I was making FLESH my strength. Deceitful heart - when will
you learn!?

What is my end if I am like that?

"For [s]he will be like a bush in the desert
And will not see when prosperity comes,
But will live in stony wastes in the wilderness
A land of salt without inhabitant"(17:6).

Lord, a heart set on people will always be a heart dry and
longing for water because people were never meant to be my
lifespring even though my deceitful heart longs for it to be
so!

Lord, help me to trust in You. Become my trust. Wretched woman.
When will I learn to not make flesh my strength?

What is the biproduct of this blessed life?

"For she will be like a tree (then I drew a picture with my meditations)planted by the water,
that extends its roots by a stream.
And will not fear when the heat comes.
But its leaves will be green,
And it will not be anxious in a year of drought.
Nor cease to yield fruit"(17:8).

"The heart is more deceitful than all else
And is desparately sick;
Who can understand it?" (17:9)

Lord, I am only beginning to really understand my deceitful heart.

Lord, don't give to me according to my ways,
According to the results of my deeds
but remember mercy and Jesus,
and Holy Spirit, transform me.

LORD, our sanctuary is a glorious throne.
LORD, my hope.
LORD, help me not to forsake you, the fountain of living water.

Hope. Now the verse I started with:

"Heal me, O LORD, And I will be healed;
Save me and I will be saved
For, You are my praise."

Lord, you have commanded Your lovingkindness
this morning. THANK YOU. You ALONE do wonderful things. Fill today with your
glory, LORD.

It ended up being a very glorious end to a wonderful weekend. I ended up loving it. My perspective was right once again. Praise God for course corrections in midstream.

I am a little down today, but again, I am having to learn the longing I have to connect is not always met in some friendships, and that was quite clear to me as I went out with two friends last night. So, today I am a bit empty again, but it has been good to be rereminded of what God taught me one Sunday morning on a porch in Ashland. Another course correction for my deceitful heart.

There is more to say about the plays, but I will stop for now.

This is the last picture of my brother Bill. He died last Monday at the age of 63. What a lovely time of sitting on the lawn outside of Balboa Park near San Diego last August. We talked of him moving to Oregon. I wanted to help him. Here is my post from last August 22.

Today, it all caught up with me, and I need to breath and grieve. I went for a walk/hike with Rosemary and enjoyed the view from up above toward Chip Ross hill. I need a higher view right now in everything.

I made a mistake in a rendezvous point for lunch with friends today. It meant Jean driving all the way to Corvallis only to to drive all the way back to Salem when she couldn't find LeAnne and me. I realized I had topped out in trying to prepare to go overseas, doing a writing class with my kids, meeting with friends, discipling women, having Bible study. Jean (who had two hours of driving) was so gracious when I told her I was an idiot. She said . . .

"Carol, you get a pass on this one. You have so much going on right now. In fact, you get a double pass. I enjoyed my drive down and trip to Jamocha Jo's (friend Nancy's coffee shop) and Bed, Bath, and Beyond. It was a great drive back up. Double pass, Carol."

So, I am NOT going berry picking tomorrow. I am slowing down in the writing class. I canceled something someone wanted me to do right after I get back from Southeast Asia. I canceled a time meeting with someone close to the time that I was leaving. I am going to give myself a double pass and grieve.

The Cowdens cancelled their annual party, and the Stews had to back out of a get-together tonight because Jake has a game.

So, we didn't know what we would do. Felt sort of lonely, but NOT for long.

I took a walk and told George that I needed a hammock! So, we went to five different stores and found one at RiteAid. We set it up. I read Plato. George watched Wimbledon and baked an apple pie. I took a nap. We went to Applebees. We took a bike ride to the river and watched the band. We came back, invited Eva for a apple pie and fireworks. We also asked Marg who said, "Do you like cherries?"

We picked a whole bag! Now, we are starting the fireworks in our driveway and will bring pie to Eva and Marg.

Peaceful Middle of the Night Reflections

I just finished Thucydides, and I am too excited to sleep. This was a huge hurdle, but "little by little gets the job done." What a bear! I liked Herodotus much better because he had more observations about the peoples throughout Persia and their social customs; some things were even hilariously funny! But Herodutus was just called Histories while Thucydides was called The History of the Peloponnesian War. So, there was very little commentary and 21 years worth of battles! UGH! Susan Wise-Bauer suggested we just skim the battle scenes, and I took her up on her advice. 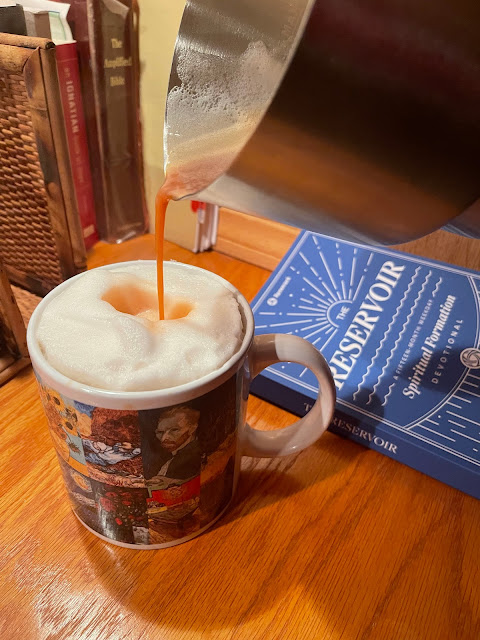