Timer is set for 15 minutes for a freewrite.
I have
24 more work hours,
10 days,
8 classes, and
4 days left on campus.
Then I am FREE! It has been such a GOOD seven years. I really have loved it. I love these young people. I think I realized something about myself this morning. This one class (not the Pilates class because it is my 19th contact term [one term was making videos for Faculty Staff Fitness and one was a broken leg] with Pilates students, and I am able to navigate their excuses by saying, "I give a generous absence and extra credit plan for unforeseen circumstances" (they all have such "good" excuses" for missing class). But this Fitness Walking class has really hit me at my insecurities and reading this morning in the EnneaThought for the Type Two really made me realize I have a long way to grow. It reads:
"As a Two, you identify powerfully with feelings for and about others and feelings about others' responses to you, and you resist recognizing your own feelings about yourself and your needs. Notice this tendency in yourself today" (The Wisdom of the Enneagram, 44).
I identify TOO powerfully with the feelings of others (in this case, my students and their many challenges). I disengage from myself in the process. I have spent so much time...twice as much time...at the computer for this Fitness Walking class as I have actually walked in the class.
That part has been great. Since I stopped doing the virtual walks, I have not walked as much (and gained a bit of weight). So, this class has been GREAT for that!
However, I have spent entirely too much time working with my students to help them succeed when they need to just put their big boy/girl pants on and do the work that many others in the class find very easy. I agonize over the ones who are getting an F in the class because they have not done the work. I identify too much with their feelings, including the athlete who might lose their scholarship because they have not done the work in the class. It should be an easy A for these people, even the non-athletes. They don't have to walk the full number of miles each day, they just have to walk/move for 50 minutes regardless of their speed. They can stroll!
I have let go a bunch, and the biggest, good thing I have done for myself is having a Centering Prayer time in my break from 11-12. I was missing my CP time at 12:30 on Monday, Wednesday, and Friday because this class is at the same time, but I realized last week that I can do it during that break. So, I have gone to a quiet place on campus and gone into Silent/Centering Prayer for 20 minutes, and that has been so good.
I realized that when I did it EVERY DAY during the Afghan crisis, it kept me so centered and peaceful. The difference between that and this class is that the Afghans were elective, and anything that I could do for them was what I could do; I could do as little or as much as I chose to do. But this class is not an elective, I am responsible for the class. And so much of this class is out of my hands because it was set up for me (and, in the long run, made more complicated by people that took it over in the interim between the instructor who set it up and me) by three other people, and it is so not how I would set it up, but it was entirely TOO MUCH to try to sort out in the week that I had between getting off the plane from Northern Cyprus and when I started the class. The week included trying to recover from jet lag and allergies from the Birch trees blooming in Amsterdam. I also had directees stacked up and previously scheduled for the interim week. I am constantly finding inconsistencies throughout the Canvas page and the syllabus. And those inconsistencies breed loopholes for students. I like to have everything SPELLED out for my students about late policies, excusable absences, attendance expectations, and extra credit. Then there are the athletes (two out of five of them) who have told me how not passing the class will ruin their athletic standing. (Is that really my problem?) But as a Type Two (who is still growing), I struggle with not wanting to make it my problem and saying "tough" (Type Eight), having compassion for their predicament, and overeating carbs to deal with the anxiety and shame (Type Two), and crawling into my cave and watching TV to escape from the overwhelming people contact of it all (Type Five).
So, all that to say is that who would have thought that a simple fitness walking class would expose so many of my insecurities? It amazes me!
And good to learn more about growing in giving it all over to God. :)
- May 24, 2022

Email ThisBlogThis!Share to TwitterShare to FacebookShare to Pinterest
Labels: Freewrite

mosey mō′zē intransitive verb To move in a leisurely, relaxed way; saunter. I think this freewrite will go on as long as I want and not be l... 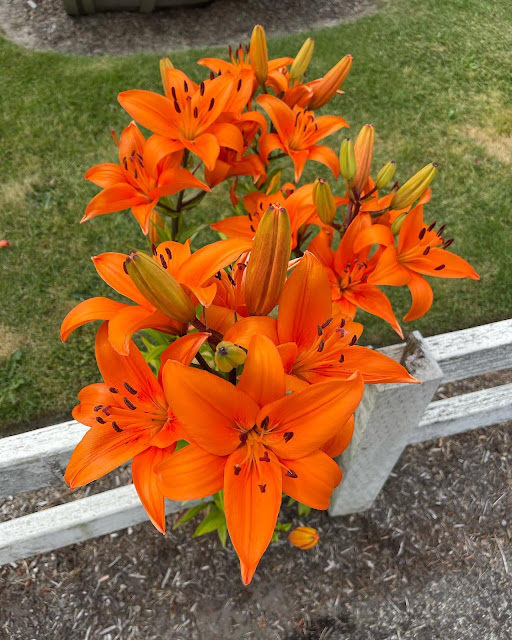